Goldfish the size of footballs are clogging Australian rivers and driving down the populations of native fish. The fish, which can grow to five pounds, were released by people who tired of having them as pets. After finding the waterways of Western Australia to be as hospitable as those in their native eastern Asia, they have established a large and mobile population. One fish was found to have migrated 144 miles in a single year.

This is a problem that is very familiar to Floridians. While goldfish haven’t established populations, cichlids, oscars, Asian carp, tilapia, and many other species have made their homes in Florida’s freshwater. Sometimes these species were fugitives from aquaculture, but they have often been released by aquarium owners who tired of their pets. Once a breeding population is established, it is extremely difficult to eradicate the fish.

It is harder for marine fish to form breeding populations. Currently, the only invasive fish species in Florida’s saltwater is the lionfish, native to the Indo-Pacific. There are actually two lionfish species found in Florida’s waters, but 97% of those caught and studied to date have been red lionfish (Pterois volitans).

Lionfish establish themselves easily in new environments due to their unique fecundity and lack of effective natural predators. A female can spawn every four days, releasing two egg sacs of 12,000 to 15,000 eggs each. It takes them less than a year to reach maturity. This rate allows them to quickly replace any adults lost to fishing or predation. Predation occurs rarely. Grouper and sharks have been observed eating lionfish, but it is uncertain how frequently this occurs. Parasites are also infrequently observed. Interactions of predators and larvae and juvenile lionfish have not been observed. 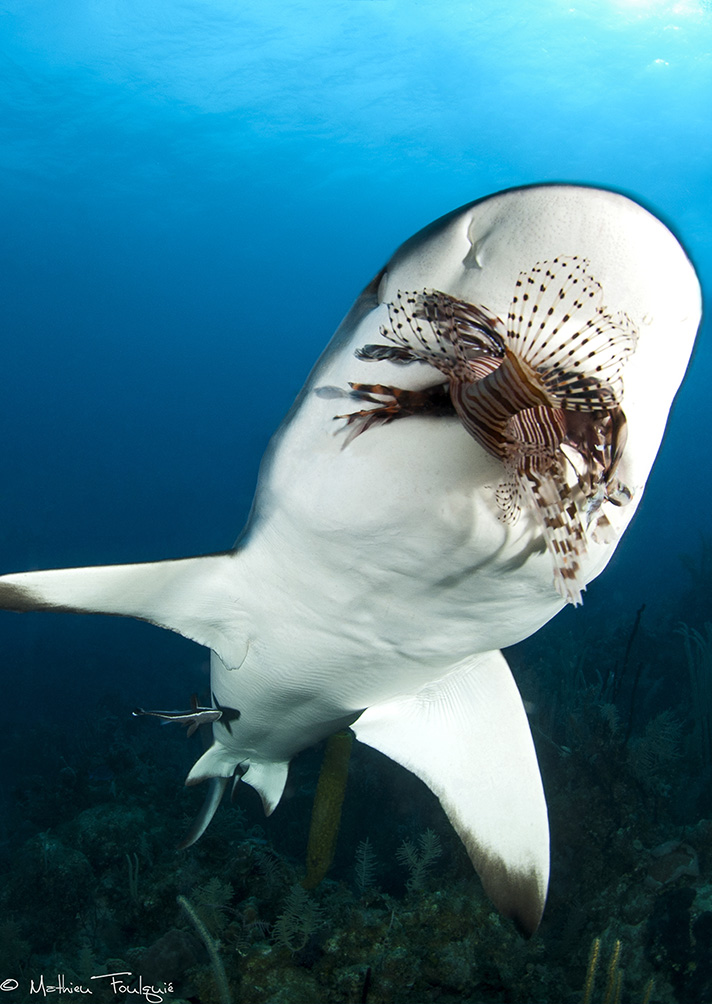 Lionfish eat large amounts of smaller fish, invertebrates, and mollusks. They have the ability to consume prey up to half their own length. Population densities of 200 adults per acre have been observed, crowding out native species such as grouper and snapper.

If you live in the Caribbean or eastern US, there are a few options for helping to eradicate the species. Fishing for your own is an option (follow this link for more information on that front). I have occasionally seen it on offer at Publix. You could also call a dive or bait shop and ask if they know of anyone catching it in your area. The species is safe to eat and is high in Omega-3 acids and low in mercury and other heavy metals. It tastes kind of like mahi mahi. More information on preparing and eating lionfish can be found here.

Here are some cozy things I liked today:

Photographer of the day: Did you see that cool picture of a Caribbean reef shark eating a lionfish? It’s by Mathieu Foulquié and more can be seen here

Good news of the day: While much of the news about dolphins in central Florida has been grim, they seem to be thriving in New Jersey.